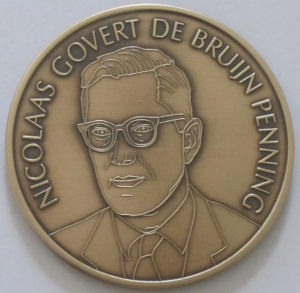 Starting in 2016, the N.G. de Bruijn Prize is awarded tri-yearly at the Netherlands Mathematical Congress. The 2016 prize was awarded for the best mathematical work that appeared in a peer reviewed journal in the years 2011 through 2014. The prize is provided by Elsevier, publisher of KWG’s scientific journal Indagationes Mathematicae. Nominees for the prize have either the Dutch nationality, or live in the Netherlands, or are affiliated with a Dutch institute. The laureate receives a medal, a certificate and a cash prize of € 4000. The laureate gives a plenary lecture at the NMC, and the Nieuw Archief voor Wiskunde (NAW) publishes an interview with the laureate or the laureate writes an article himself/herself for a broad mathematical audience, to be published in NAW.